Meet the trees of the future: BioUrban’s microalgae reactors purify the air in large cities

BioUrban is a pioneering technology that absorbs carbon from the atmosphere and mitigates global warming. These 4-meter-high carbon sinks are capable of cleaning the air that 2,790 people breathe every day, or 40 tons of CO2 per year.

Developed by Mexican company BiomiTech, the artificial tree is designed to be placed in spaces in the center of large cities that have high levels of pollution such as small parks, schools and hospitals. Within its structure, it contains microalgae reactors that absorb pollutant particles to feed on them and, after a natural process of photosynthesis, convert them into oxygen and biomass. 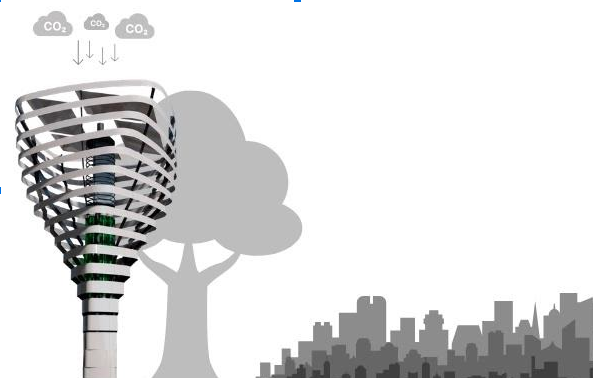 The first of these artifacts has been successfully installed in Mexico, specifically, in the capital of the Mexican state of Puebla. There, BioUrban has reduced pollution levels in one of the busiest areas of the city near the university. Now, ClimateTrade has partnered with BiomiTech to bring the technology to Spain.

“The most polluting areas of large cities, structurally do not allow to hold a large number of trees in their spaces, and thanks to this new technology, CO2 capture is maximized and air quality is improved. Clearly, the installation of a BioUrban device is complementary to the development of other initiatives such as urban forests, ”says Francisco Benedito, CEO of ClimateTrade.

“Cities like Madrid, Barcelona or Valencia suffer from high levels of pollution. With this initiative we intend to maximize the capture of CO2 and improve the quality of the air in our cities,” he adds.

This technology is a nature-based solution to climate change that will allow the creation of a new circular bioeconomy capable of producing fuels from the pollution generated by our daily activities.